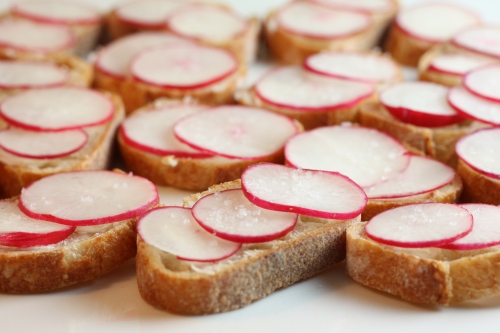 I feel like radishes are one of those vegetables that people either love or hate.  I fall into the love category.  My favorite radishes are those that are pickled – what I consider to be the “japanese way.”  Adding vinegar and salt to radishes basically turns them into crunchy matter (in a way like cucumbers) that can take on any flavor.  I recently read Molly Wizenberg’s book,  A Homemade Life and there was a recipe for radishes made the “french way.”  I was very intrigued by this recipe – first of all because you don’t see a lot of recipes with radishes as the main ingredient, but also, because I basically love anything french.  We had some friends coming over for dinner, so I decided to make them as an appetizer – these friends love fresh vegetables, so I was sure they would be a hit.  As it turns out, I was the only one of all of us (8 including kids) that liked radishes – but let me tell you – even my husband that wouldn’t eat one if I paid him, loved this preparation.  The sea salt just melts into the radishes and the butter just gives them an incredible flavor – they were amazing, and we ate them all up.  So – for all of you that are not so keen on radishes, you have not tried them the “french way.”

Preheat the oven to 350 degrees.  Slice the baguette into thin slices – a little less than 1/2″ thick.  Place them on a cookie sheet and bake them in the oven until crisp on the outside.  I do this in 3 minute increments to make sure they don’t get too brown – it should take about 10 minutes total depending on your oven.

While the bread is cooling, thinly slice the radishes – almost like a wafer.  Take a piece of bread and spread a thin layer of butter.  Layer some radishes on top in a single layer (overlapping slightly) and sprinkle with some sea salt.

For a printer-friendly version of this recipe, click here:  Radish Toasts