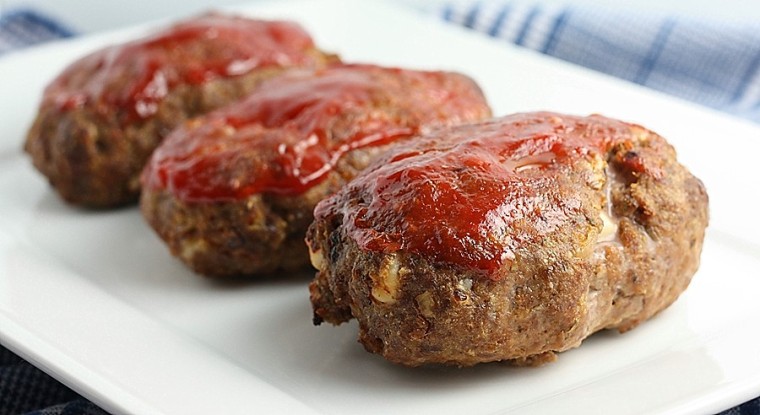 It has been a little while since I tried to pull meat loaf past my kids.  It is hilarious how they love hamburgers and meatballs, but when it comes to meat loaf, there is an instant aversion.  I am not sure what it is about it – but I need to get them over the hump.  Meat loaf is just so easy – much easier than making a bunch of meatballs, and more flavorful than normal hamburgers.  Plus, I don’t have to have buns around – although I was seriously thinking about serving this meat loaf on a bun, just to see if they would notice…but I know better than to try that one.

I saw this recipe in Cooking Light and the word “minis” caught my eye.  Maybe if I made mini meat loaves, instead of one big one, they would think they are just huge oblong shaped meatballs?  So I tried it, and it worked.  It also could have been the cheese chunks in the middle – cheese is like butter in my house – everything is better with cheese.  So I wouldn’t say that my girls were telling me this is the best meal they have ever had, but they did eat everything on their plate – which is definitely a compliment.  Oh, I should also let you know – since they are both anti-condiments – I didn’t put ketchup on theirs, and that also helped.  So – at least now I know the secret of making meat loaf for kids – it’s meat loaf minis!