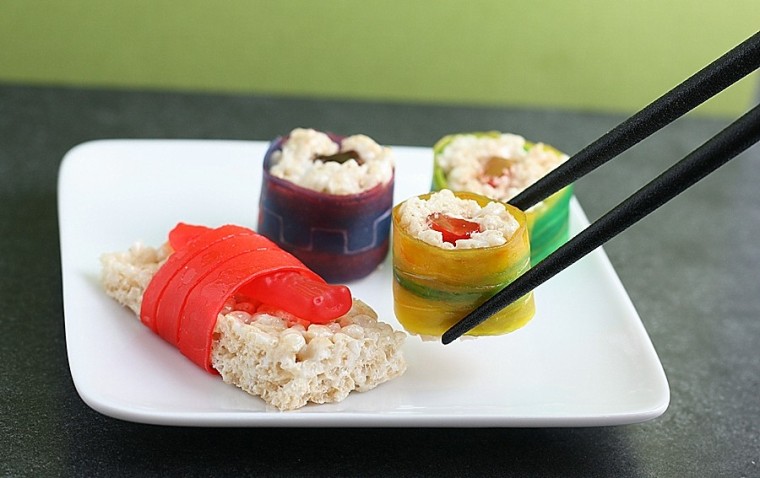 It’s birthday time again, this time for first-born daughter.  Of course birthdays get more exciting the older you get, until a certain point…  This year she wanted to bring candy sushi into school to celebrate with her classmates, and then I would make bowling pin cupcakes for her birthday party over the weekend – yes, they were going bowling.  I planned it all out – one weekend I make the candy sushi, the next I deal with the cupcakes.

Years ago one of my best friends was living in Tokyo – so my husband and I made the long journey over to visit.  We just had to go when we had a personal tour guide that spoke the language.  I loved it, but with my seafood allergy, I have to admit it was a little frustrating.  She still managed to take us to tons of places where I could eat…oh and the bread in Japan is amazing, I know, you would never think that – but I ate very well.

My husband LOVES sushi, so one day we walked down to the fresh fish market so that they could enjoy some fresh sushi – I brought a book, found a nearby hotel, and sat in the lobby while they feasted.  I couldn’t even go near the fish market, the smells were just too much for me…

So candy sushi is about the closest I will ever come to eating the stuff.  Boy was this fun to make.  She helped me a lot by wrapping all the sushi.  I haven’t made rice krispie treats in years – and for some reason I thought it was actually complicated – not at all!  It was so easy, and easy enough to flatten out in preparation for rolling.  We had a blast, and they came out looking spectacular!  She said they were a huge hit at school – lots of kids were out because of the holiday weekend, so her teacher brought the rest into the teacher’s lounge, and they went nuts.  Gotta love sushi!!

Stir in the Kellogg’s Rice Krispies cereal coating them well with the melted marshmallow mixture.

Using a buttered or silicone spatula, press the mixture evenly into a 12 x 17 x 1 inch (jelly roll) pan which has been buttered or sprayed with non-stick spray or lined with wax paper.  Cool completely.

To make the rolls, cut a 12 x 2.5 inch strip of the rice krispie teats.  Place gummy worms next to each other in the middle of the strip.  Very carefully, roll the rice around the gummy worms.  Slice the roll into about 11 pieces.  Take some fruit by the foot, and wrap the outside of each roll.

To make the sushi, cut the rest of the rice krispie treats into rectangles.  Place a swedish fish in the center, and wrap with some fruit by the foot.

For a printer-friendly version of this recipe, please click here:  Candy Sushi