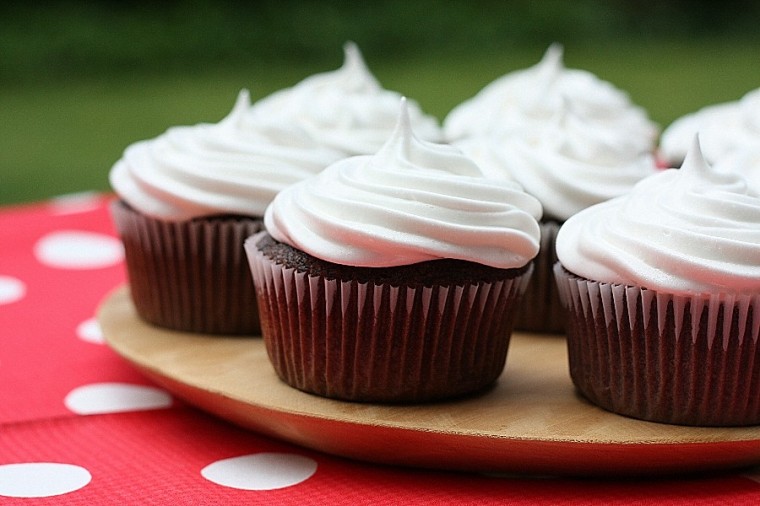 Ever since I made these, I have been thinking about making them again – but doing things a bit differently to make sure that the Ganache stays intact.  Someone even commented on the post and alerted me to a web discussion going on about this very issue – with the very recipe from Cook’s Illustrated. It was an interesting discussion, I could tell that there were a lot of frustrated bakers out there.  I wasn’t that frustrated just because the cupcakes were so outstanding, so what if the Ganache ended up melting through the cake. Still, it was fascinating.  There was even one person that suggested Cook’s Illustrated PhotoShopped the picture, and made it look like the Ganache stayed together.  Whatever will be, will be.  But I wanted another chance.

I saw this recipe in Bon Appetit, and it was the word “filled” that caught my attention.  I read the recipe, and there it was – fill the cupcakes after they bake.  I know, I know – of course that’s how you do it – but it was so cool to think you could actually put a spoonful of Ganache on the batter, and have the cake bake around it.  That method just wasn’t in the cards for me, and I decided that filling the cupcakes after they bake was the only way for me to be successful quickly – without making hundreds of cupcakes to figure out the best method.  Well, this one certainly worked – the problem was that the filling and the frosting were the best parts – the cake was nothing to write home about.  Nothing like the cake in the this version.  So – I bet you can guess what I am going to do next?  Exactly – this process with the other cake – I can’t wait!

Bake cupcakes until tester inserted into center comes out with  some crumbs attached, 22 to 25 minutes. Cool cupcakes completely in  pans.

DO AHEAD Can be made 4 hours ahead. Let  stand at room temperature.

Using thumb, press down center of each cupcake from top to  bottom, forming deep pocket. Spoon or pipe ganache into pocket  of each  cupcake.

DO AHEAD Cupcakes can be made 1 day ahead. Cover with cake dome and store at room  temperature.

For a printer-friendly version of this recipe, please click here:  Ganache-Filled Chcoolate Cupcakes with Marshmallow Frosting