My older daughter has started reading my cooking magazines – it is adorable.  So last night, as we were heading out for date night – she asked if she could take my Bon Appetit upstairs to read before bed.  This morning I got the run down of all the great recipes – but the one that stood out the most was the Watermelon Soda Float.  What is summer without a little watermelon?  Summer is basically over here, but that doesn’t mean we have given up all hope – we are still trying to eke out every last bit.  A few weeks ago we were in the super market, and they had these adorable baby watermelons.  My kids are both suckers for cute things (I wonder where they got that from?), but I held strong, and did not put one of those babies in my cart.  I told them that at some point during the summer we would get one though.  Well, with Labor Day coming next weekend, we were running out of time – so today I walked past the display, and chose the most perfect one I could find.

When I brought it home, the girls were so excited, but not half as excited as they were to learn what I was going to do with it.  They couldn’t wait for dessert.  When dinner was finally over, I broke it to them that I wanted to clean up first. Am I a mean Mom?  I was making the Watermelon Soda Float after all, but waiting is so hard.  So – I finally got them into the glasses, with the perfect pink straws that my sister gave me – and the girls were just about to dig in, when I stopped them.  I had to take a picture!  At this point they were bouncing off the walls – it was almost impossible to get a shot without their little hands trying to sneak in – but I managed to get a couple.  We all loved the dessert – the watermelon soda was so sweet and summery – and the frozen yogurt on top gave it just enough cream flavor to mix in with the soda.  It was summer in a glass – hey, we will take what we can get.

Using a melon baller, scoop out 1 1/2 cups watermelon balls and cantaloupe balls, into a small bowl. Cover and chill. Cut enough watermelon into 1″ pieces to measure 8 cups. Stir sugar and 1/3 cup water in a small bowl until sugar dissolves. Set simple syrup aside.

Purée melon pieces (not balls) in a blender until smooth; strain juice through a fine-mesh sieve into a large measuring cup or pitcher (you should have about 4 cups juice). Discard solids. Whisk in simple syrup, lime juice, and salt.

DO AHEAD: Purée can be made 4 hours ahead. Cover and chill.

For a printer-friendly version of this recipe, please click here:  Watermelon Soda Float 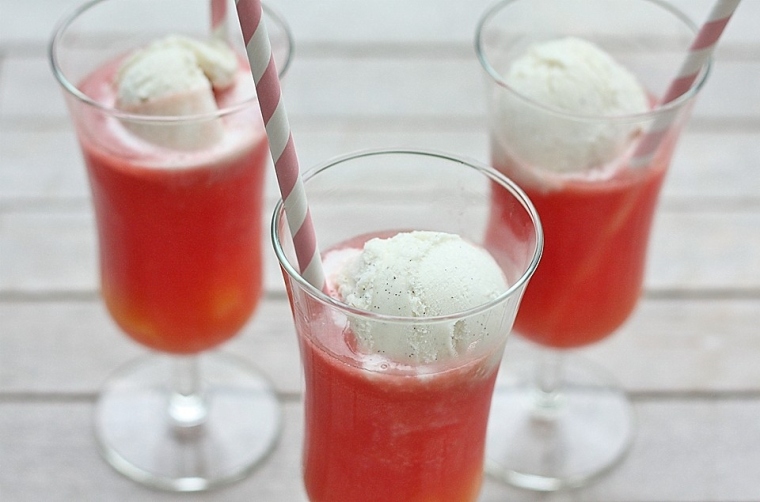