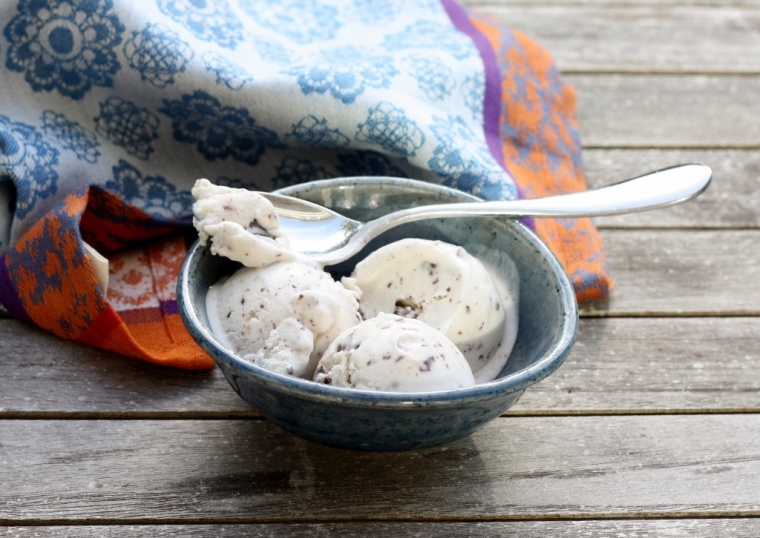 We didn’t have much of a Junuary this year, and I am not complaining.  Summer eased in nicely from Spring, and it has been just spectacular.  We have that dark blue sky, and Mt. Rainer looks like a vanilla ice cream come, with little flecks of chocolate chips.  At least that’s what my husband and I both think – and whenever we look at it, we start craving ice cream.

Aside from cooking on the Egg, my husband doesn’t spend a ton of time researching recipes.  In fact, I am not sure I have ever seen him show much interest in doing that until the egg came along, and it has been so nice to see that we have just one more thing in common.  I am not worried at all about what we will do with our time someday when we retire…the problem will be that we will want to do too much.

So imagine my surprise when he came into the kitchen with a recipe he had found for dairy-free ice cream.  One of our local shops has a vegan flavor at all times, and my husband has developed quite an addiction.  He decided instead of spending $4 on a scoop, that maybe he should just make some himself.  He found this recipe on a blog called The Nourishing Gourmet, and I must say, I was extremely impressed.  Of course I couldn’t let him make it though – I wanted to be the one!  I got super excited to try out this coconut milk ice cream, it looked and sounded delicious.

We ended up making this in a two step process – I wanted to taste it without the mint flavoring first – to really taste that coconut flavor.  Now it was good, but once we added that mint, it took it to a different level.  You would never have known that it was dairy-free.  Now of course, you need to let this thaw slightly on the counter after it has been in the freezer for a while, because it really becomes solid in the freezer – but if you do that, you will not be disappointed.  So now the big question – is Mt. Rainer really Mint Rainer??  Wouldn’t that be something…

In a medium size bowl, whisk together the coconut milk, honey, and extracts. Freeze in ice cream maker according to instructions. Meanwhile, finely chop the dark chocolate and add to the ice cream maker the last 30 seconds or so. Freeze to “ripen” or eat right away, soft serve style. If you leave in the freezer for more than a few hours, let it sit at room temperature for about 10-15 minutes to soften before serving. Enjoy!