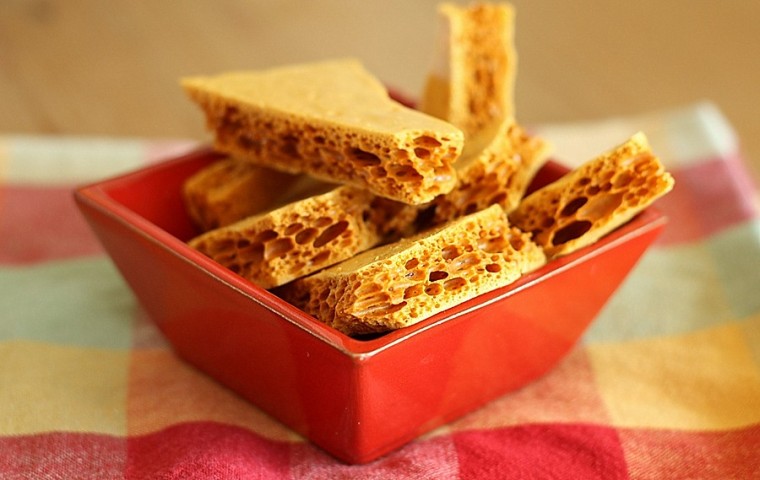 My husband is the jingle king.  He knows every jingle that was ever created – seriously.  He can’t seem to remember when I ask him to take out the garbage, yet when I ask him about a jingle that is 30 years old, it flows out of his mouth like he watched it on television yesterday.  So, when I found this recipe in Bon Appetit for honeycomb, what do you think came next?  You got it…and of course for days, there it was, stuck in my head.

This was quite an adventure.  I was actually making this to go with a dessert I was making for an auction.  More on that later in another post…  So it was time to make the honey comb – and I had about 4 hours left before the dessert had to be sitting at the auction.  I had never made honeycomb before, but I make caramel all the time, so I thought I was prepared.  I read somewhere that you have to use a really large pot, because once you add in the baking soda, it really foams up.  So, I used my large 8 quart saucepan.  That was challenge number one – the pan was so big that I couldn’t use the candy thermometer to make sure I took it off at the right time.  Now, the recipe didn’t say to use one, but I wanted to be safe – I only had 4 hours left.  Instead I decided to go without the thermometer.  I let the sugar turn just golden amber, but it was too late.  By the time I added the baking soda, it smelled like burnt sugar.  I tried to pour it out and see if I could salvage it – but the honeycomb was inedible.

Honeycomb Take 2.  Now I was down to about 3 1/2 hours, and starting to sweat.  It was painful making the first batch.  The pot was so hot and heavy, it was almost impossible to pour the honeycomb out – and I was so worried about burning myself.  I had to have a better plan.  Also – I had to take it off the heat much earlier in the process – this is not like making caramel.  As soon as the sugar starts to turn color – that’s it.  So – I went with that, and it worked.  It was not as hard the second time, and the honeycomb came out perfect.  It tasted almost like burnt marshmallows, which is seriously one of my most favorite tastes ever.  This was sweet and crunchy, and amazingly delicious.  Just like in the jingle…honeycomb’s big, yeah yeah yeah!

Line a baking sheet with parchment paper or foil. Combine  sugar, corn syrup, honey, and 1/4 cup water in a heavy deep saucepan. Stir over  medium-low heat until sugar dissolves. Increase heat to high; bring to a boil.  Cook without stirring, occasionally swirling pan and brushing down sides with a  wet pastry brush, until sugar turns pale amber. Working quickly, add baking soda  (mixture will foam up dramatically); whisk quickly just to combine. Immediately  pour candy over prepared sheet (do not spread out). Let stand undisturbed until  cool, about 20 minutes. Hit candy in several places with the handle of a knife  to crack into pieces.

For a printer-friendly version of this recipe, please click here:  Honeycomb